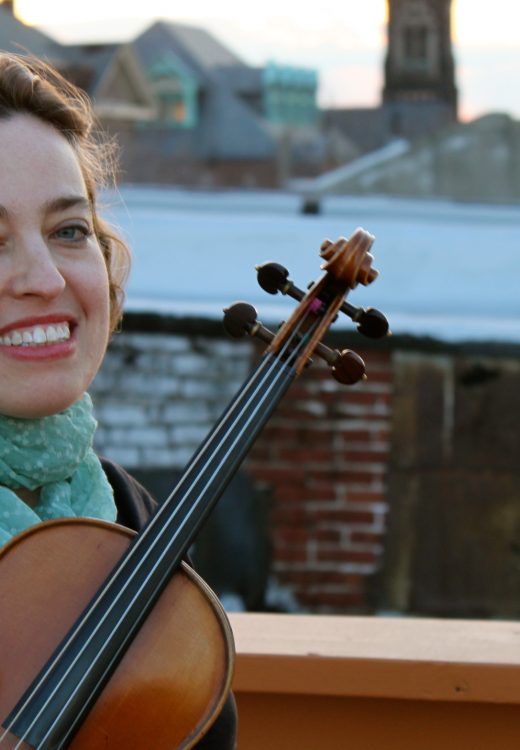 Violinist Lisa Vaupel appears throughout the United States as a solo, chamber, and
orchestral musician. She currently performs as Principal Second Violin of the
Delaware Symphony Orchestra and as Associate Concertmaster of Opera Delaware.
Lisa is also a tenured member of the Colorado Music Festival Orchestra and plays
regularly with the Pennsylvania Ballet Orchestra, Opera Company of Philadelphia,
and Chamber Orchestra of Philadelphia, She also enjoys playing with the Broadway
touring shows through the Kimmel Center Series, including playing most recently
as Concertmaster for Hello Dolly and with the three month Hamilton run in fall of
2019.
Lisa was a member of the Serafin String Quartet from 2013 to 2019, with a rigorous
concert schedule and teaching residency at University of Delaware with the
quartet. Serafin highlights included concerts at The Arts at Trinity series in
Wilmington, University of Delaware Concert Series, Vanderbilt University and Blair
Quartet collaborative concerts, Highlands-Cashiers Chamber Music Festival, NC,
Marco Island Arts Center, FL and a Weill Hall concert in New York premiering two
new works of composer Julia Adolphe.
Lisa has also performed as Assistant Concertmaster with the Spoleto Festival in
Italy, the Pacific Music Festival in Japan, the Singapore Symphony, and the
American-Russian Youth Orchestra. As a chamber musician, she regularly
performs in chamber settings at the Colorado Music Festival Chamber Concert
Series and the Delaware Symphony Champagne Chamber Series, and has been
featured in the Sequoia Chamber Workshop at Humboldt State University (Arcata,
CA), Sundays at Three (Columbia, MD), Baltimore’s Bach Concert Series, and
Goucher College’s Yogurt Concerts. Lisa has appeared as soloist in Barber’s Violin
Concerto and Vivaldi’s Four Seasons with the Frederick Symphony Orchestra.
Also a dedicated advocate of arts education, Lisa has served as Coordinator and
Teaching Artist for Philadelphia Orchestra’s School Partnership Program and as a
guest artist on the World Café’s Live Connections Bridges programs in
collaboration with other local musicians. Lisa has created and performed both
concerts and music residencies through the education programs of the Baltimore
Symphony, Colorado Music Festival, and Delaware Symphony, as well as serving as
First Violinist of the Live Wire String Quartet in elementary school
curriculum-integrated performances in the greater Baltimore area. She has served

on the music faculty of University of Delaware and Goucher College, and enjoys
teaching elementary through college level violin students. In May 2010, Lisa
received the Delaware Symphony’s Albert Beekhuis Award, which honors a
symphony musician who exceeds expectations in fulfilling the mission of the DSO
in artistic excellence as well as educational and community engagement endeavors.
She received her Bachelor of Music degree with High Distinction from Indiana
University, Bloomington, and earned her Master of Music degree from the Peabody
Conservatory.